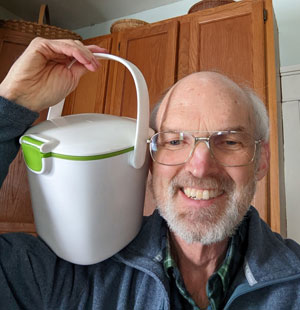 My better half, Alan, has just been named the Tennessee Environmental Council’s Composter of the Season!

Thanks to Alan, we’ve been composting for over two decades. It began when our girls were young and the household was running at breakneck speed — two full-time jobs, two different schools, ballet lessons, church committee meetings, tai kwon do, etc., etc., etc.

He suggested that we start composting, but I resisted. In those days minutes at home seemed a precious and scarce resource. However, we had an ancient “sadza pail” — a leftover from my childhood in then-Rhodesia (now Zimbabwe) — which was a perfect bucket. To sweeten the deal he said I never had to be the one to empty the compost. How could I refuse?

The sadza pail finally rusted out at the venerable age 52 and we replaced it with two dandy Oxo compost bins which we rotate.

And here he is — in the Tennessee Environmental Council’s newsletter:

Congratulations to Alan Leiserson of Davidson County for winning our fall 2021 “Composter of the Season” award that came with a $50 prize!

Alan, seen here with his food scrap collection bin, has been an active member of Come, Post Your Compost for a while now, faithfully submitting his food scrap diversion totals regularly. Thank you, Alan!

"The whole essence of Zen consists in walking along the razor's edge of now. To be so utterly, so completely present that no problem, no suffering, nothing that is not who you are in your essence can survive in you. In the now, in the absence of time, all your problems dissolve."